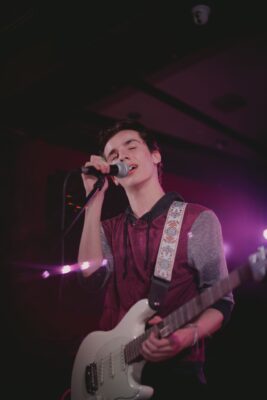 Beamer started playing guitar when he was 5 years old, and as he loves to tell his audiences, that was when he first saw Keith Urban in the video “Start A Band” with Brad Paisley.  He turned to his Mom and said “I want to learn to play guitar.  I want to be just like Keith Urban”.  So he got his first guitar and started lessons.

He wrote his first song at the age of 7, and that same year started singing as well, wowing audiences everywhere he went.

When he was 9, he took first place at the Vancouver P.N.E. ‘Star Showdown’ in the youth category, against contestants from all across British Columbia.  He also performed major roles in numerous stage musicals, as well as the 4th lead roll in the Norman Rockwell movie, “A Christmas Tail”.

At just the age of 11, he was awarded the inaugural Penticton Youth Arts Award for ages 25 and under.  It was also when he became the youngest ever to be signed to award winning Agency ‘Invictus Entertainment Group’.

In November 2015, he was thrilled to be awarded membership in The Brotherhood Of The Guitar, a group of highly talented musicians from many parts of the world. In addition, he also received a sponsorship from Music Man/Ernie Ball guitars.

His talents received recognition from some major Canadian Country Music artists for whom he got the opening slot, including 3 times each for both George Canyon and Brett Kissel, as well as Aaron Pritchett.  He also got to open for Dwight Yoakam in 2018, which started as a 20 minute set and ended up becoming a 65 minute fill in performance to an appreciative audience.  U.S. artist Granger Smith also had him as part of his Western Canadian Tour.

In 2016 he released his first EP and two singles from that went to Country Radio, the first of which he co-wrote, reached #74 on the charts and was nominated for ‘Song of The Year’ at the ACMA’s.

Beamer has been writing steadily both on his own and with other songwriters in Nashville and in the past 3 years, he’s been working with legendary Billboard hit song writer Keith Follese and his wife Adrienne.  On July 6th 2018, he released his third new single “Roller Coaster”,  which had over 450k streams and was added to Disney Country Radio in L.A. . In 2019, he has released 3 singles, including “I Knew”, “I Want It Now” and on  Dec. 20th, he released another single. “Crazy Being Crazy, which has hit #53 on the TRAX Chart and #58 On Mediabase Chart”.   To date, he has accumulated over 1,300,000 streams on Apple Music & Spotify and 500k views on his Music Videos.

In 2020 he released a new single titled “I Got You” in January, followed up with “Something To Do With A Girl” on July 31st. His follow up EP titled ‘Cloud 9 24/7’ has been nominated for Album Of The Year at the 2020 BC Country Music Awards.

In April 2021, he released his latest EP titled “UPSIDE DOWN including 2 new singles titled “Summer Forever” and “Never Not Love You”.

Through all the COVID restrictions, he continues to write and looks forward to being back on the stage!